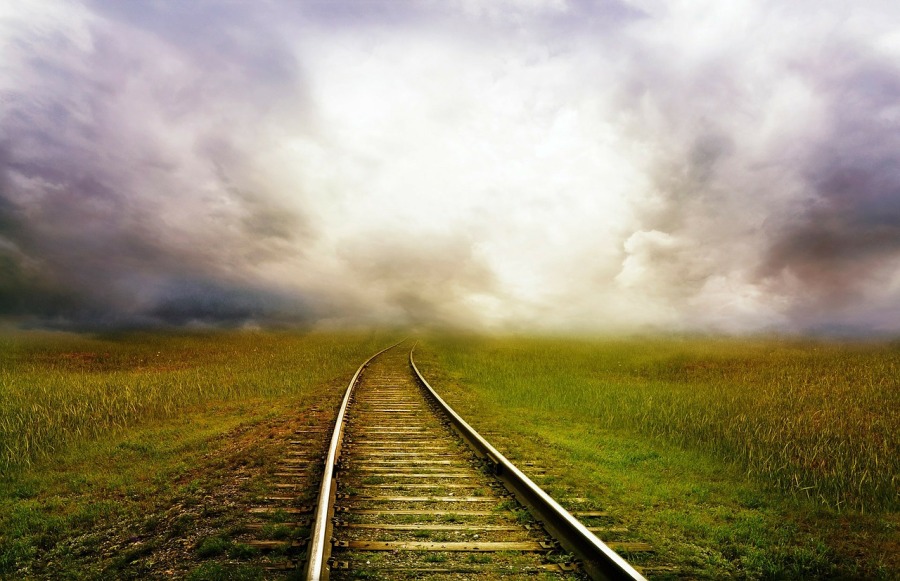 As the northbound train was arriving, people began to crowd around behind me. I could feel a warmth on the nape of my neck triggered by breeze pushing me away from the cusp of the yellow thermoplastic road paint that read “Stay Behind the Yellow Line.” It’s not so much that I like to live life on the edge, but more of a nagging compulsion of always wanting to be prepared. For what? I don’t know, but that’s the whole point.

As the train’s speed waned, preparing to dock and open its doors, the people behind me began to swarm the door. They were ants gorging on my sun-melted Popsicle body; gouging my bubble gum eyeballs as they slowly floated away in a viscous stream of sugar, puddling on the sidewalk dividers like blood. Although I felt a legion of hands fondling me, one in particular began pushing me or run straight through me as if I was a permeable incorporeal entity. With my peripheral vision, I noticed that the perpetrator was a woman in her 50s or 60s trying to get in the train as if her underwear was full of rats. The automatic doors swooshed open and she shoved me out of the way. I was glad that the stampede of tired angry people didn’t trample me; it would’ve been awkward to stand in tight quarters— the smell of armpit sweat as strong as the air conditioning was weak— with the people who almost murdered me.

I looked through the multitude of body— my eyes bouncing from person to person— as one would records in a jukebox to see what I could tune into. There was a melody in the shape of a young man standing in the narrow hallway that separated the conjoined train cars. He was wearing a burgundy slubby texture t-shirt with his right arm in the right sleeve, and his left arm concealed inside of it. The bebop crescendoing within looked as though he was trying to rip his heart out of his chest, digging his nails deep into his flesh. When he placed his left arm through the hoop of the left shirt sleeve, he proceeded to grabbing his head, rubbing his face and violently thrashing his shoulders. The jazz of whatever he was on had fully entranced his body at this point, placing him in a looping scat, pleasure seizure. The woman who had pushed me out of her way, lowered her tabloid magazine to take a quick peek, and raised up to cover her eyes immediately.

The arrhythmic jerkings of the young man’s trip lulled me into a torpor that would have led to standing sleep had a man carrying a backpack and a guitar in his hand not entered the bus exuding short-winded immediacy. His sun-burnt face was wrinkled, evidence of his advancing age rather than sun damage. He seemed too old to be busking for a living; too cynical, lacking the naïveté required to feed the lie that he’s a good singer and that he’ll make it someday. His steel resolve and friendliness made it clear that he had consigned his dream of “making it” to this loathsome existence he had resigned himself to— a never ending cycle of gigs that could end at any minute. The best he could hope for was getting anything he could— monetarily or sympathetically. He was wearing a black fedora with a checkered ribbon that was not becoming of him, thus coming off more as a costume rather than an article of clothing meant at best to protect his head from the elements, and at worst, as a simple fashion statement. Before the ensuing performance, he made a proclamation regarding what was about to unfold before us.

“I’m going to play some songs for you,” he said and threw the guitar strap— also lined with black and white checkers— over his head.

As he began to serenade the passengers, he walked up and down the aisles, swinging up his mangy guitar, strutting as if on the stage of Woodstock in ’69, trying to spread his jovial tunes like the John the Baptist of rock. Old ladies leaned away from him as you would when the circus tigers got too close to the bleachers. The guitar sounded as if it was jangling a broken organ inside— pipes clanging around in it— and his breath smelled like a stale beer.

“Alright,” he said after he finished singing part of one song, “pass the hat around and put money in it. Just 50 cents or a dollar.” A small price to pay to touch his sweat.

The southbound train approached ours on the opposite track. For a brief moment both trains were in perfect love-making harmony; close enough to blow a kiss at the people in the other train. This instant—lasting the lifespan of an inhaled breath— shuffled the square window panes moving in opposition like a deck of cards whose faces were stills of people going home. It created the illusion of a short film reel. The window I was staring out of was my screen, while the ones on the other train whizzing by, frame by frame, were a silent motion picture too sudden not to take notice, but too common to commit any memory to it. Too fleeting to even forget that it ever happened.

Jose Oseguera is an LA-based writer of poetry, short fiction and literary nonfiction. Having grown up in a primarily immigrant, urban environment, Jose has always been interested in the people and places around him, and the stories that each of these has to share. He seeks to write about the accounts in marginalized people’s lives that often go untold and the beauty in the urban landscapes that goes overseen.

His writing has been featured in Meat for Tea, Sky Island Journal, The Esthetic Apostle, The McNeese Review, and The Main Street Rag. His work has also been nominated for the ‘Best of the Net’ award and the ‘Pushcart Prize.’

One thought on “On Tracks of Never-Ending Light – Jose Osegura”

Whisper and the Roar